All in-person meetings, classes and events have been postponed or moved to a virtual setting. Please view our online Events Calendar for a list of these items.

Questions? Please contact us at info@caapts.org. Thank you for your patience! 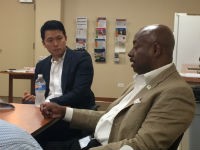 Eugene Jones, Jr., Acting CEO of the Chicago Housing Authority, met with the CAA Board last week and described his goals and objectives for the agency. Mr. Jones has experience leading other public housing authorities around the country. He is working to develop a strategic plan for the CHA, improving workforce morale and performance, and building 2,000 more CHA units by 2017. Mr. Jones wants to transform the attitude about public housing among its residents from "entitlement" to "transitional housing," which was the original intent of the program. He agreed to CAA's suggestion about developing ongoing dialogue with CHA staff via roundtable discussions about how the housing choice voucher program can be improved to get more private sector participation. Mr. Jones is interested in partnering with the business community to build support for public and assisted housing, and will be conducting CHA "open houses" for developers and the general public. CAA is committed to working with Mr. Jones to improve the programs and initiatives of the CHA.

Is Your Community or Company a Member?

If you are an employee of a CAA member and previously had a CAA login, click the first option below to access your account and enter the email we have on file for you to begin taking advantage of your membership.

If you are new to CAA or do not receive an email after following the step above, you will need to select the second option below to create an account.

The members of CAA invite and encourage you to join! By working together, we can achieve our mission to maintain and enhance our industry as a whole.

All membership applications for the CAA must be approved. All memberships are company based and individuals cannot join CAA.